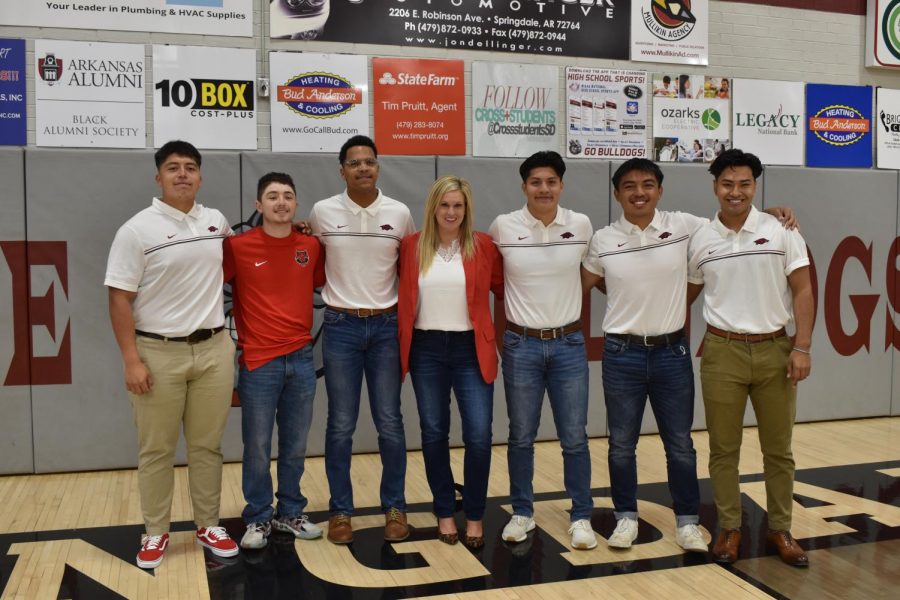 “I feel like I belong at state,” he said. “I love the environment, it is a real family environment.”

Daugherty expressed her pride in the teammates Thursday, reminding the crowd that Springdale has only had a competitive co-ed cheer team for five years.

“The six young men sitting here today have been a part of that for three of the five years,” she said. “While they’ve had many accomplishments, their spirit and character are what truly set them apart.”

Manjarrez has participated in cheer, track and football throughout high school.

During football season, he was often on campus from 6 a.m. for cheer practice to 6 p.m. when football practice ended.

“My schedule was always busy, and I didn’t have time to do anything else but I managed it and it was really fun,” he said.

Cortina, Bowman, and Ramirez joined the team two years ago after being recruited by the girls on the team.

While Ramirez initially had to be talked into joining the team, he now loves the sport and practices every chance he gets.

Lifting people in the air is the best part, he said. “It looks crazy difficult but it just takes muscle and technique,” he said.

Ramirez said he’s mostly excited that he gets to continue cheering.

“Unless you join a team outside of school, you don’t really get to cheer beyond high school,” he said. “Being on the university team, I get to continue cheering for the next four years, which I think is pretty cool.”

Cortina said he also was hesitant to join the team at first but kept showing up and soon started loving the sport and the bond he formed with teammates.

“I’m looking forward to the team experience,” he said. “I’m excited to be in school and have those friendships and connections that come with that.”

Rojas, also a football player, has only been cheering for about five months. He was recruited by a good friend, Omar Cruz, a senior cheerleader on the Springdale team.

“Rojas was on the football team and is very strong,” Cruz said. “It took me a couple days to convince him, I told him to show up once and if you don’t like it, don’t come back. He showed up the next day.”

Rojas said he’s looking forward to expanding his skills and traveling with the cheer team.

While they may not have imagined they would be cheering in college, each of the six students had goals to further their education after high school.

Getting this opportunity, Bowman said, is a dream come true and means a lot for Springdale. Bowman said he’s mostly proud that he and his teammates will be an inspiration for future Springdale students.

“Seeing us on the sidelines will show them that’s something they can do too,” he said.

Daugherty agreed that a new standard has been set for the cheer program.

“This is a huge accomplishment for all of you,” she told the six seniors. “You’ve set records, you’ve taken us to nationals, and you’ve broken the stigma of what co-ed cheer looks like. In a year filled with uncertainty and change you rose to the occasion everytime I asked and I’m so proud of each one of you and so excited for your journey into college.”