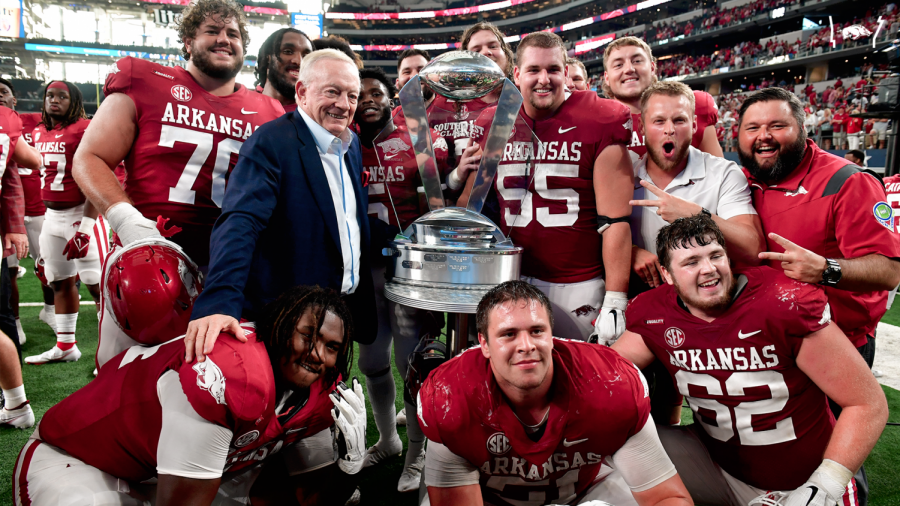 Going into the 2021 college football season, it seemed like the Arkansas Razorbacks were going to marginally improve on their record of last year with most analysts having the hogs winning about 4 to 5 games. This made sense to many people. Arkansas was crowned once again with the hardest football schedule of any college team in the FBS, and really how much better can a team get within a year. There was a good amount of hope and optimism, and a bit of doubt floating around in the back of everyone’s minds.

The Hog’s reached “Hog Heaven” with their week two win over #15 Texas in Fayetteville. People rushed the field, sending the message that bad football that had plagued the hogs during the Chad Morris and late Brett Bielema era, was officially over. That performance was not simply a shootout, where Arkansas came up on top at the end of 4 quarters, but rather the physical embodiment of a band of wild razorbacks eliminating both the offensive and defensive threat that is the Texas Longhorns. This dominating win propelled them into the AP top 25, the first time since 2016. Many people still questioned if Arkansas is for real though, and needed more proof of success.

Well, they got that proof. Today, the Hogs are sitting at number #8 in the AP poll, coming off of a dominating performance over Texas A&M in Jerry’s World in Arlington, Tex. The Hogs single handedly controlled the first half, with a beautiful waltz of the entire defense, putting constant pressure on the quarterback, the inside, and the wide-outs. They only allowed 3 points in the total of the first half, while A&M’s defence allowed 17. The final score was 10-20 Arkansas, securing the Southwest Classic trophy for the first time since the 2011 season.

Many fans expelled their Razorback pride by, of course, going onto Twitter and Reddit and saying questionable things and trying to put some more coal into the hype train, steaming towards Athens for next week’s matchup against the #2 Georgia Bulldogs.

One user on Reddit, username “American_Gambit”, recalled that, “I remember sitting at the bar at Red Lobster on my birthday watching the hogs lose to Auburn by over 40 points. If you would have told me we would be #8 in two years, I would have poured hot shrimp scampi juice on you and said ‘get thee hence’.”

Another user, username “Kinslers_List”, said, “I will be getting a Sam Pittman Tattoo on my … if Arkansas runs the table in the SEC.” People responded with fervor by stating that they would pitch in, and create a go fund me for this endeavor. And these people were not just fellow Arkansas fans, but rather fans from around the world of college football, and the moderators of the subreddit, r/CFB, said that they would make sure that the user would “commit” to the promise if the Hogs were to actually run the table in the SEC. The Razorback Football social media team also had a field day with the win, bringing in ironic memes from the early 2010s on their Twitter and Instagram, engaging with fans across multiple platforms.

With everything said and done, it’s confirmed that the Hogs this year are no joke. If KJ Jefferson can stay healthy and the team can maintain the team culture, I think that it is reasonable to think that Arkansas will be in the conversation for being the second best in the SEC West, after Alabama of course. But, that is looking too far ahead, we’re on to Athens next week to face the #2 Georgia Bulldogs in no doubt one of the most anticipated matchups this season. The Hogs have already achieved legitimacy, now it is a test to see if they can launch themselves into the stratosphere.