The SHS boys soccer team beat Bentonville West 1-0 Friday afternoon in the quarter-finals of the 6A state tournament. They will advance to the semi-finals, playing the winner of the Heritage vs. Northside game on Saturday.

Coach DJ Beeler said the team accomplished their goal today and will be ready for another challenge tomorrow.

“We’re locked in and focused on getting through tomorrow as well,” he said. “We’re playing really good teams at this point, everybody’s strong and it’s gonna take a really good effort to get past the next game.”

Beeler said he’s confident in his team to show up and play well. “We’ve been working hard since November,” he said.

“It’s a good feeling scoring for your team,” he said. “This win is for the whole team, we all worked together to get this goal.”

Guerrero said the team has worked hard to get where they are and every player contributes to the win.

“We’re all family,” he said. “We’re here for each other, it’s always positive vibes here.” 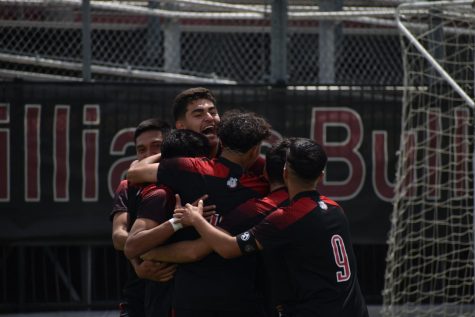